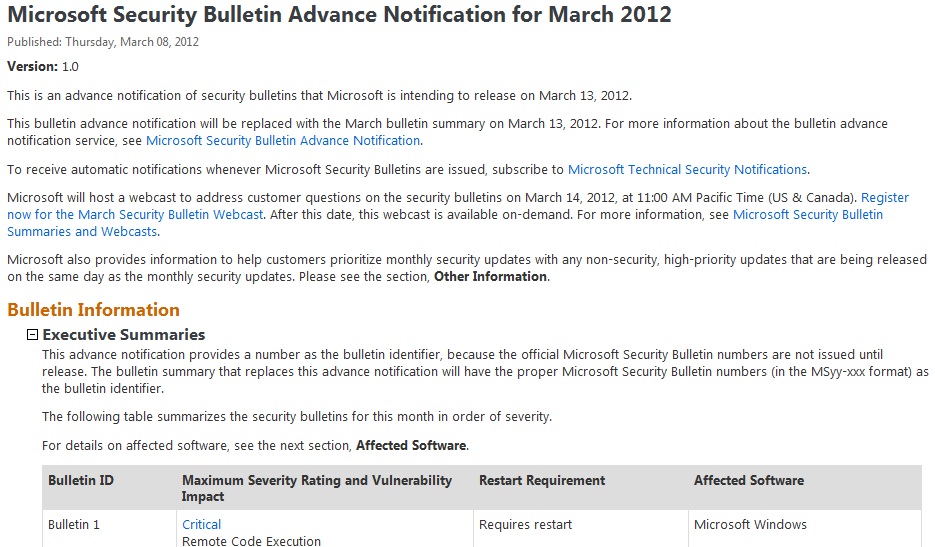 Microsoft has pre-announced next week’s Patch Day, and it doesn’t look too bad.

According to their advanced notification post for March, Microsoft will release six security bulletins next Tuesday, which fix seven flaws in Windows, Visual Studio and Expression Studio. Microsoft only rates one of the bulletins as Critical.

If you want to get out of work in time for St. Patty’s Day weekend, you should make sure to prepare to patch these Microsoft flaws as quickly as you can next week. I suspect the Windows updates are most important to typical administrators. If you have developers in your organization, definitely check out the Visual Studio update. Personally, I have never heard of Microsoft Expression Studio until now. It seems to be a vector drawing program similar to Adobe’s Illustrator. If you use Expression Studio, certainly check out Microsoft’s update for it. That said, I don’t think many attackers will target flaws in this particular software yet. Thus, I suspect this update should take least priority.

I’ll be able to share more details about Microsoft’s bulletins next Tuesday. Make sure to check back here then.. — Corey Nachreiner, CISSP (@SecAdept)