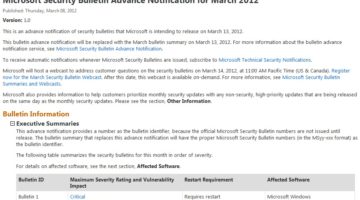 Microsoft has pre-announced next week's Patch Day, and it doesn't look too bad. According to their advanced notification post for March, Microsoft will release six security bulletins next Tuesday, which fix seven flaws in Windows, Visual Studio and Expression Studio. Microsoft only rates one of the bulletins as Critical. If you want to get out of work in time for St. Patty's … END_OF_DOCUMENT_TOKEN_TO_BE_REPLACED