If you haven’t heard by now, many fake accounts exist on Twitter, Facebook, and LinkedIn. A social media bot refers to an account that programmatically posts content. Many bots serve good purposes such as reporting and gathering information.  The data from bots can help businesses, governments, news agencies and even security professionals. However, many of the automated accounts post messages to sway public opinion to push an agenda using propaganda.

On Wednesday, Facebook announced that it found evidence of fake accounts “likely operated out of Russia” that bought $100,000 in political advertising. The accounts appear to be linked to a Russian firm tied to pro-Kremlin messages. Facebook did not release the content of the ads and stated that they did not mention a particular candidate. Although the ads are not available, a Buzzfeed article from November 16, 2016 shows the top fake news articles on Facebook at time of the of the US. Presidential election. The Huffington Post has photos of the false news stories. Did you see one of these articles on Facebook while considering who to vote for in the election?

One false news source received close to 3 million engagements. The question is, how many of those interactions were from fake accounts used to spread the lies? How many people believed these stories were true? Were these false articles linked to the ads purchased by the Russian organization? The story also shows genuine articles that well-known U.S. news sources posted at the same time and the number of engagements.

A recent study finds that up to 48 million Twitter accounts could be bots. In 2014, Twitter acknowledged that 23 million users were bots, which indicates the number of bots has almost doubled in three years. Some articles point to Russian groups as the source of some social media bots while others claim that Trump supporters also use automated accounts to push opinions. CNN recently reported that 83 million Facebook accounts are Fakes and Dups. A recent article in CSO warns about fraud on LinkedIn.

Social Media bots exist worldwide. In 2011, a Russian magazine reported that Facebook bots were massively voting for Putin.  In 2015, Ukrainian Facebook users asked the CEO of Facebook to help restore pro-Ukrainian blocked accounts. When logged into Facebook, you can see some of the comments here. Think Progress reports that after the U.S. Election the bots started targeting other governments. The Computational Propaganda Project at the University of Oxford studies the effects of automated and programmatic propaganda in public life around the world.

What do social media bots do?

In April 2017, Laura Galante gave a Ted Talk called How to Exploit a Democracy explaining how the U.S. was under an “information attack” by APT 28, a group of Russian government hackers. An APT is a term used by cyber security experts for an “Advanced Persistent Threat” because the attacker takes carefully planned, covert steps often over a long period of time. This group also goes by the nickname “Fancy Bear” and others. This group infiltrated social media influenced news media reports. This same group spied on the Macron campaign in France.

In some cases, social bots have attacked other accounts. A Daily Beast reporter explains how an army of bots probably got him kicked off Twitter after a story about suspicious pro-Kremlin activity by fake Twitter accounts. A former FBI agent claims Russian bots are posting calls to fire the National Security Advisor. Brian Krebs writes that Twitter bots use likes and retweets for intimidation. Other nefarious uses for social media accounts include sending secret messages and getting people to click on malicious links to download malware. Twitter bots can also act as a command and control channel that sends commands to hosts infected with malware such as banking trojans.

It is hard to create an exact formula for figuring out if a social media account is fake or automated. Like spam-mail catchers, the filter will occasionally catch real people with honest intentions and miss bots. According to a Bloomberg article, Pro-Russian Bots Sharpen Online Attacks for 2018 U.S. Vote,  “the level of sophistication among these bots is increasing and becoming more and more advanced to try to evade bot detection.” However, there are some things you can watch for to decide if an account is real or fake.

Many tweets report that bots have only a few followers – 17 has been a popular number. 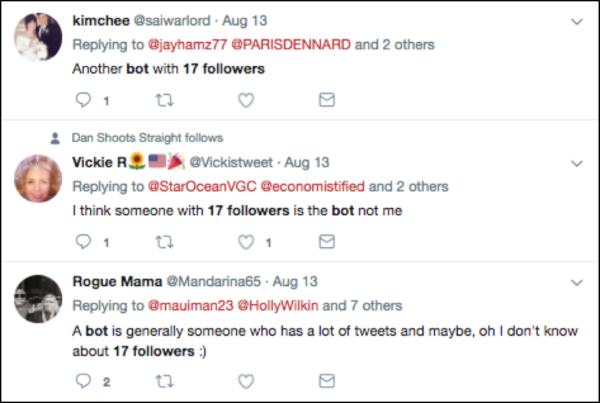 Some bot accounts have a very high number of followers. The followers may be fake, people who automatically follow anyone who follows them, or purchased. 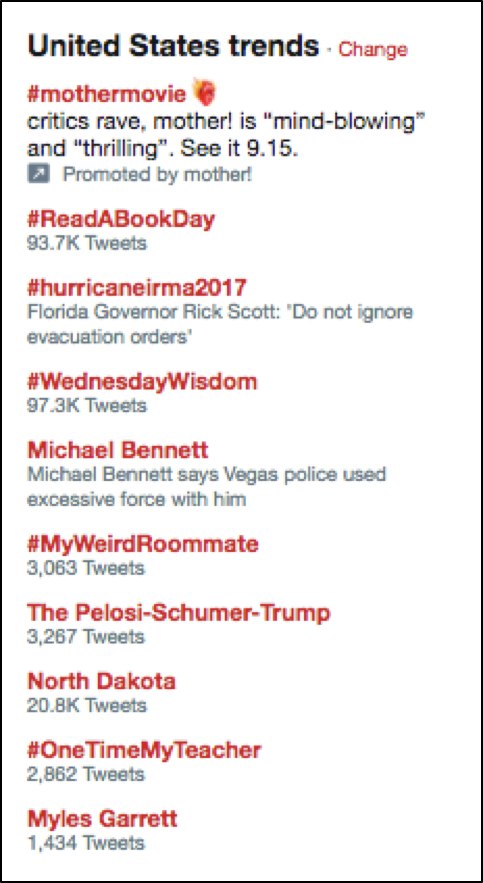 Bots will often use a common #hashtag or set of hashtags to push an agenda. Hashtags start with a pound symbol and use a common phrase so people can find related tweets. Hashtags are useful at conferences where organizers publicize a common hashtag. Conference attendees can search for a hashtag on Twitter to find each other and see related posts. Real and fake accounts also use hashtags to support an agenda such as winning an election or selling a product.

Popular hashtags show up in the Twitter trends on the left side of Twitter when a user logs into an account. By default, the trends list will use data from the account to derive the list. If the Twitter user follows many bots or many bots follow it, the bots may be driving the list to push a selected agenda. Users can click the “change” link to show top trends for a location instead. Bots may also be driving the location-based list or using top trends to insert specific thought patterns into popular topics.

Many times, bots post repetitive tweets. Common themes include money-making schemes, offers to buy twitter followers, or political agendas. Some bots have the same account photos on multiple accounts as noted in other bot-related articles. Some bots post the same tweets across multiple accounts. I discovered these three accounts which post the same exact content when looking at some hashtags related to a security conference I attended. 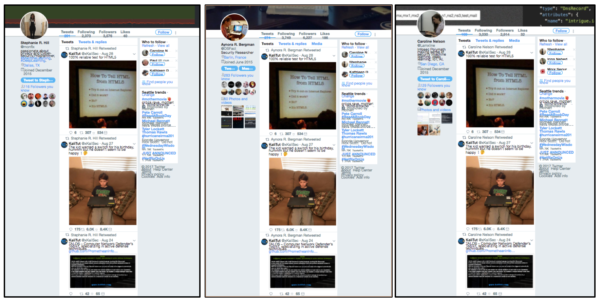 The Medium suggests that three ways to spot a Twitter bot include the timing of tweets, lack of personal information, and an account that mainly retweets content from other accounts. Sophos warns to watch out for typos. Brian Krebs posted an article on botnet retweets and intimidation which includes links to lists of suspected bot accounts. You could check to see if any of these accounts are following you or you are following them. 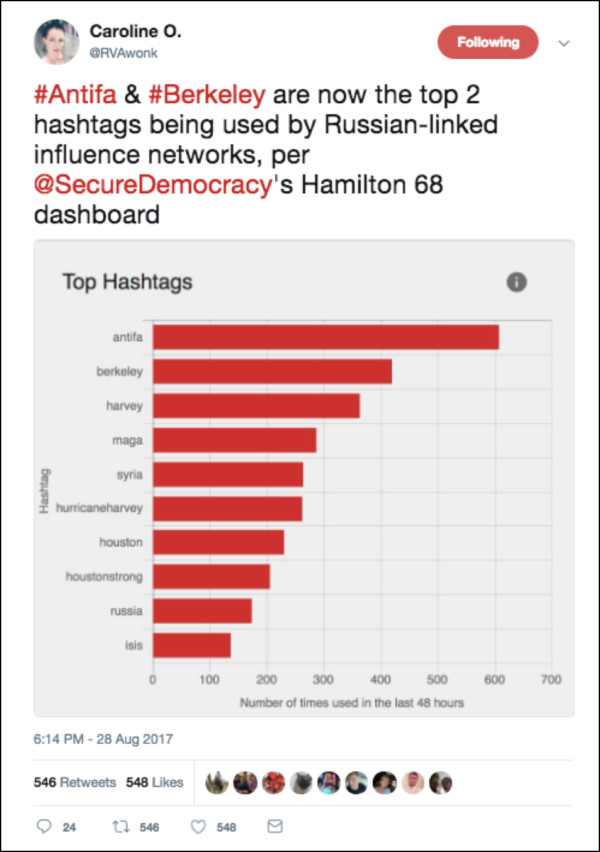 Hamilton 68 displays a dashboard that watches the activity of Twitter accounts linked to what they consider to be Russian influence operators and reports. After the Charlottesville riots, reports showed that these accounts were heavily using the #antifa hashtag.

Indiana University hosts a tool called Botometer that tries to figure out how many of your followers are bots. One word of caution – this tool is not 100% accurate as noted in this article where it ranked some frequent valid Twitter posters as high as well-known bots with nearly the same score. The Botometer website includes a bot repository which offers datasets and tools for bot detection. A CNET article mentions Twitter Counter and Twitter Audit.

Hopefully people are more selective about the people they let onto their Facebook and LinkedIn accounts. If someone claims to be a friend or colleague see if the requesting account connections are people in your existing network unless you post content that is only already publicly available anyway. Check the profile to see if it looks legitimate, though in some cases this can be tricky. If you notice any suspicious behavior, you can just block the person completely or from seeing your posts and vice versa.

The term “Internet Trolls” refers to accounts that post “inflammatory, extraneous or off-topic messages” that upset people and start quarrels. An Australian newspaper published a photo of what it calls a “Troll Factory” – a Russian department dedicated to this activity. This categorization likely comes from a keynote speech given by Nicole Sullivan in 2012 called Don’t Feed the Trolls. To protect yourself and others from online propaganda, avoid responding to posts designed to stir up emotions and start arguments as explained in the video. That will help lessen the effectiveness of bots designed exactly for this purpose.

The Best Defense – Yourself

The best defense against social media bots is you. In the words of Laura Galante at the end of her Ted Talk, “think critically […] and unflinchingly pursue the truth.” Here are some tools that may help.

Bots on Twitter, LinkedIn, and Facebook are just as much cyber threats as phishing, malware and DDOS attacks. These bots and their influence can disrupt communities around the world. Many historical figures have manipulated people using social tactics. I hope this article will help spread awareness of the existence of these bots and offers tools and techniques to defend against harmful influence. — Teri Radichel (@teriradichel)