If any security professionals need quick reminder that the end-of-year holidays are over, and it’s time to get back to protecting information, Microsoft’s first Patch Day of the year will likely do that for you. However, the good news is Microsoft is giving us a slow start with only four security updates for January. Unfortunately, two other companies, Oracle and Adobe, have filled in the gaps with big updates of the own.

According to their summary post, Microsoft released four bulletins today which fix security flaws in Windows, Office, and their Dynamics AX server (an enterprise resource planning or ERP solution).  They didn’t release any Critical bulletins this month, only ones with an Important rating; essentially their “medium” severity. Though vulnerabilities with this rating might be a bit more difficult to exploit (requiring local access or victim interaction), some of them could still allow remote attackers to gain full control of your users’ machines. In short, you should still takes these updates seriously despite the light load, and their less critical nature.

As far as priority, start with the Windows kernel vulnerability, as it fixes a zero day flaw that attackers are actively exploiting in the wild. Granted, the attackers exploiting it need local access to your computer to leverage the flaw, but if they do they gains full (SYSTEM) control of the PC. The remaining Windows and Office flaws are just about equal in severity. Which you focus on first is up to you. I’d probably consider the Office one since bad guys like using malicious documents in their spear phishing emails lately. Finally, the Dynamix AX update fixes a DoS flaw. I don’t suspect many smaller organizations use this product, and DoS flaws aren’t quite as severe as others. So save this one for last, if you happen to use the product.

With Microsoft done, your focus this month is probably better served with patching Adobe and Oracle products. Adobe’s patch day always falls on the same Tuesday as Microsoft’s. However, Oracle happens to follow a quarterly patch cycle, which only occasionally lines up directly with Microsoft’s Patch Day. Unfortunately, this is one such month, and you get to enjoy the unholy trifecta of patching three big corporations’ products at once. Yay (sarcasm)!

Today, Adobe has released updates for Reader, Acrobat, and Flash Player, and Oracle has released their huge Critical Patch Update, fixing over a hundred flaws in a wide variety of products. I’ll post more details about these updates later today, but for now you can check out Adobe or Oracles pre-announcement advisories if you want a head start.

I’ll post the detailed alerts for Microsoft’s Windows and Office updates shortly. Since I doubt the majority of customer use Dynamics AX, I don’t plan on posting a full alert for it, so if you use it be sure to check out Microsoft alert (MS14-004) yourself, and grab the corresponding updates. Stay tuned! — Corey Nachreiner, CISSP (@SecAdept) 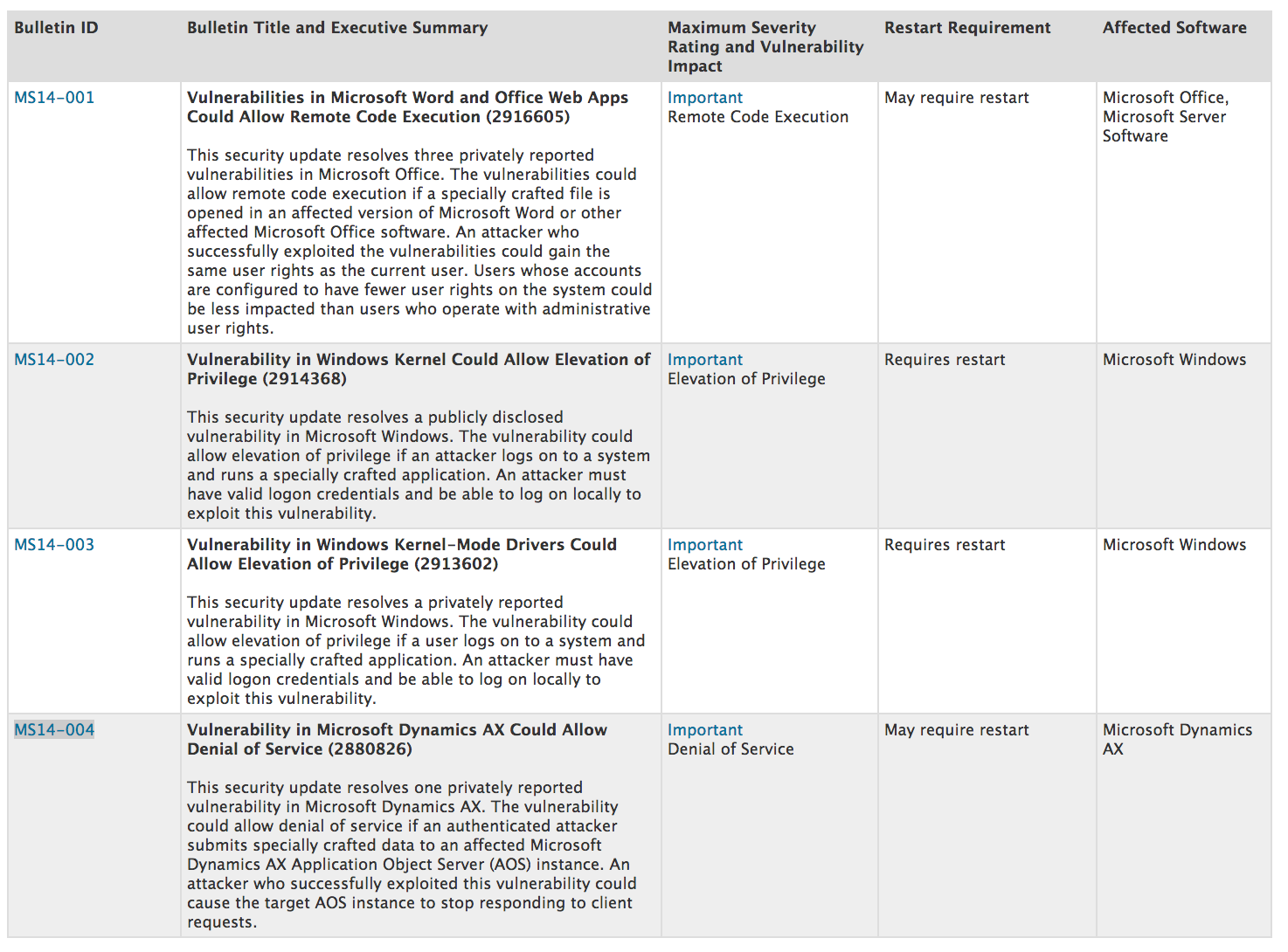