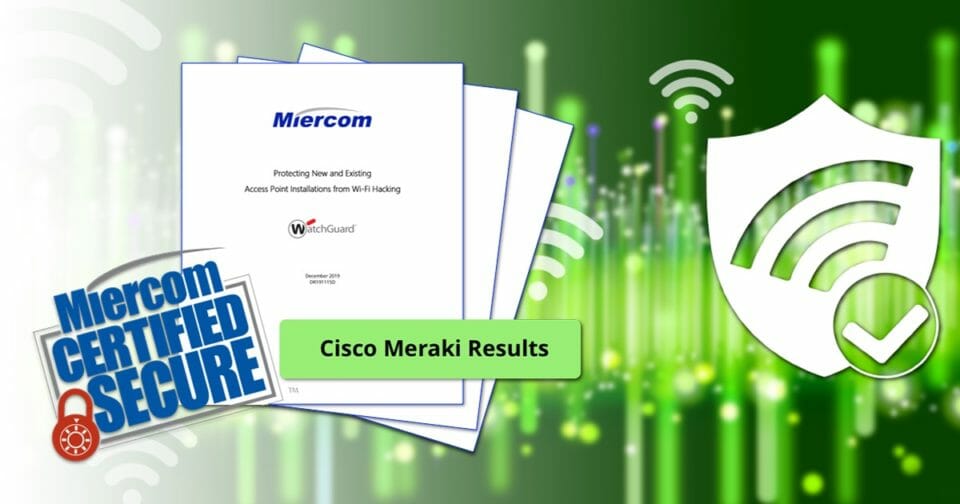 Wi-Fi hacking is a hot topic, but one that’s plagued by ambiguous and often contradictory technical terminology. Luckily, the lack of common definitions for Wi-Fi threat vectors has actually produced a solution to the problem: the Trusted Wireless Environment. The Trusted Wireless Environment framework succinctly defines the six Layer 2 Wi-Fi hacks that affect nearly every business today and provides a simple test criterion to determine if a Wi-Fi network is protected from each type of attack.

Having been exposed to the Trusted Wireless Environment in the past, Miercom test professionals recognized that WatchGuard has been gearing its cloud-managed AP roadmap with unique security feature sets. To determine how existing Cisco Meraki networks can become Trusted Wireless Environment compliant, Miercom configured a WatchGuard AP125 AP as a security sensor dedicated to protecting the Meraki MR33 from the six known Wi-Fi threats. The results show that Meraki Wi-Fi networks that would’ve been vulnerable to the six Wi-Fi threats are 100% protected once a WatchGuard AP125 APs was added.  From a deployment perspective, network and security administrators will find a simple solution where the Meraki APs continue to connect Wi-Fi users as usual and the WatchGuard APs act as a sort of Wireless Intrusion Prevention System (WIPS) sentry, constantly monitoring the air space and wired network for presence of any of the six threats.

If they’re as curious as I am, Meraki Wi-Fi network administrators have probably been banging their heads against their desks trying to understand how Air Marshal (the WIPS solution included with most Meraki APs) functions in a live network. For many of us, we tend to feel nervous about enabling the Air Marshal containment feature and often disable it completely after reading the warning message from Cisco:

Rest assured Meraki administrators! You can disable Air Marshal completely and safely offload WIPS to WatchGuard APs, which are designed specifically to plug the serious security gaps in the Wi-Fi attack surface.

Those interested in testing their own Meraki Wi-Fi networks for Trusted Wireless Environment compliance can follow the Trusted Wireless Environment test guide, and contact Miercom via their website for a more thorough test involving live client workloads. Lastly, if you’re wondering how many WatchGuard APs you need to add to your existing Meraki Wi-Fi network to protect it, any WatchGuard reseller near you has access to a professional service from WatchGuard that will provide you with a predictive simulation survey that determines the recommended number of WatchGuard APs, installation locations, and WIPS/Wi-Fi coverage range.