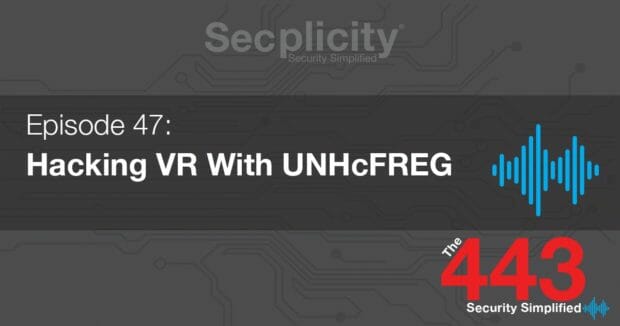 Welcome back to another episode of The 443 – Security Simplified. This week, we sit down with three members of the University of New Haven Cyber Forensics Research and Education Group to discuss their resent research into virtual reality application security. UNHcFREG recently discovered several vulnerabilities in the popular VR application BigRoom with results ranging from spying on users to code execution on the victim’s computer. We’ll chat with Dr. Ibrahim (Abe) Baggili, Martin Vondráček, and Peter Casey about this research project, and their thoughts on the future of VR and AR security.

Dr. Ibrahim (Abe) Baggili is the Elder Family Endowed Chair of Computer Science & Cybersecurity at the Tagliatela College of Engineering, Department of Computer & Electrical Engineering and Computer Science at the University of New Haven, CT, specializing in Cybersecurity & Forensics. He serves as the Assistant Dean and is the founder of the University of New Haven’s Cyber Forensics Research and Education Group (UNHcFREG). Abe is also the former editor-in-chief of the Journal of Digital Forensics, Security and Law (JDFSL). He received his BSc, MSc and PhD all from Purdue University where he worked as a researcher in CERIAS.

Abe co-authored over 70 publications including books, peer reviewed articles, and conference papers and has received funding for his work from a variety of sources including the NSF, NSA, DHS and MITRE. Most recently, work with his students showed security issues in mobile social messaging applications that affect over 1 billion people worldwide they also found major Virtual Reality exploits that affect people globally. His research interests include cybersecurity and forensics from technical, social, and psychological perspectives. He has worked closely with law enforcement and private sector and has published work on real challenges facing cybercriminal investigators and has presented at a number of conferences worldwide.

Abe’s work has also been featured in news outlets and on TV worldwide in over 20 languages. To learn more about Abe and his work you can visit http://www.baggili.com and http://www.unhcfreg.com.

Martin Vondráček is an enthusiastic student researcher focused on cybersecurity and computer networks, currently (2019) pursuing his master’s degree at the Faculty of Information Technology, Brno University of Technology (FIT BUT), Czech Republic. He has completed his Bachelor’s degree with honors at the same university and has received several academic awards including dean’s award and rector’s award. Martin joined the Cyber Forensics Research & Education Group (UNHcFREG) and Virtual Reality Lab as a visiting scholar from the FIT BUT in 2018. During his studies at the FIT BUT, he collaborated with the Networks and Distributed Systems Research Group ([email protected]). His previous research was focused on automation of Man-in-the-Middle attack on Wi-Fi networks. Martin has also participated in student exchange programs at the University of Malta and the University of South Wales. You can contact him at linkedin.com/in/vondracek-martin, find out more about his publicly available work at github.com/mvondracek, and follow him at twitter.com/VondracekMar.