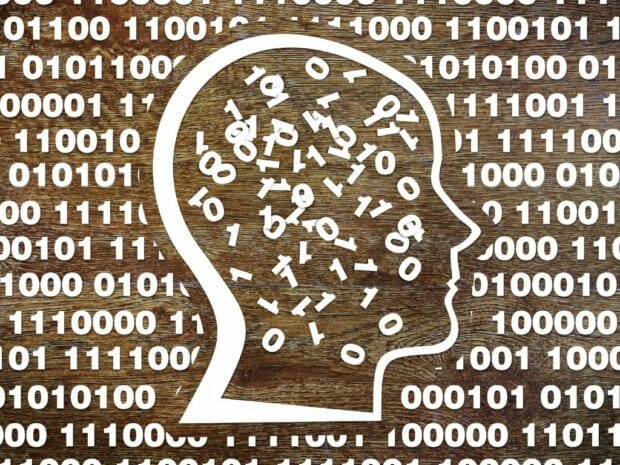 Without going into a history lesson, nor a scientific explanation for that matter, which both can lead you down several rabbit holes, let’s go ahead and discuss this a bit further and hopefully answer that question. My desire is to clarify this to the point of at least having a high-level overview of how computers work and how we’re able to communicate the way we do.

For starters, computer systems’ circuitry is powered by, well, electricity. This flow of electricity can be controlled, throttling this flow can be registered as “off” and allowing this flow can be considered as “on”. The current flows through transistors which can be set to “on” or “off”, 1 or 0. In its simplest form, this is the process of determining a “binary digit” – a bit for short. If electricity is freely flowing through the transistor, then a “1” is registered, otherwise it is considered as off and assigned a “0”. There are many more complexities in how transistors are used and organized but that’s beyond the scope of what I am writing.

Let’s compare a few numbering methods with our current numbering system – base 10. Base 10 refers to the fact that there are 10 different numbers, 0 – 9. Further, each number is valued at its placement in that number; single unit column, tens column, hundreds column, thousands column, etc. If there is a “9” in the one’s column, adding more to it causes a “carry over” to the next column; 9 + 2 = 11, so we went from a number solely in the one’s column and added to it causing a carry over into the ten’s column.

The binary format is also known as base 2, because there are “2” values that can be used – either “0” or “1”.  One main differentiator is the fact that each column doubles in size from the previous column. So instead of how base 10 goes ones, tens, hundreds, etc, binary goes ones, twos, fours, eights, 16, etc.

If you thought this was fun, then let’s add to that. There can be some rather long and hard-to-read binary streams. Considering that applications and such are constant streams, imagine a Matrix-like stream passing in front of you. That’d be tough to read with convenience. Fortunately, our engineers formatted various ways to better represent longer streams of binary data – base 8 or octal, and base 16 or hexadecimal. Base 8 refers to 8 different numbers, 0 – 7. Once you hit 7, the numbering starts over a “0” again and you start anew. Base 16 goes from 0 – 9 but once 10 is up, we use the alphabet ranging from “A” to “F”. So if you were to write “10” in hexadecimal, it’d be represented as “A”, “11” is “B”, etc. up to “16” and “F”.

In order to translate the binary data back in to readable text, there needs to be some standardized format for distinguishing values. Think of this as a legend on a map describing what symbols mean. An example for English-speaking countries, computers use the American Standard Code for Information Interchange (ASCII) character set. It has a specific format that represents 128 possible options for lower and uppercase letters (A, B, C, a, b, c, etc.), numbers (1, 2, 3, etc.), as well as special characters (!, @, #, etc.). See this link for more details about the ASCII character set as well as the hexadecimal reference but here is also a convenient image: 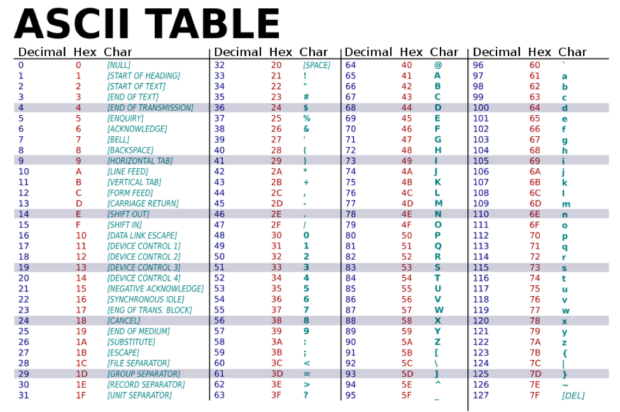 Now non-English-speaking countries naturally wouldn’t have the same character set, due to the fact that they don’t use the same letters we do. In addition, some characters require more bits for their representation than our standard alphabet, which only adds to the complexity. Fortunately, the standardizing bodies worked on a better format – Unicode.

Unicode was created in an attempt to create a single character set that included every writing system. Up until then, however, many countries and governing bodies made their own decisions and it seemed rather chaotic – at least back in the day. If you’re curious for more examples, refer to this link.

With the desire to include languages worldwide, a character set that is aware of these differences was needed. Unicode is this attempt at being able to map each character from various languages and have a corresponding place on a computer in its binary format. There are some good references pertaining to this blog that I highly encourage you to read if the high-level overview doesn’t make sense.

Spolsky, J. (October 8, 2003). The Absolute Minimum Every Software Developer Absolutely, Positively Must Know About Unicode and Character Sets (No Excuses!). Retrieved from https://www.joelonsoftware.com/2003/10/08/the-absolute-minimum-every-software-developer-absolutely-positively-must-know-about-unicode-and-character-sets-no-excuses/

Weinand, I. Retrieved from https://www.bottomupcs.com/index.xhtml