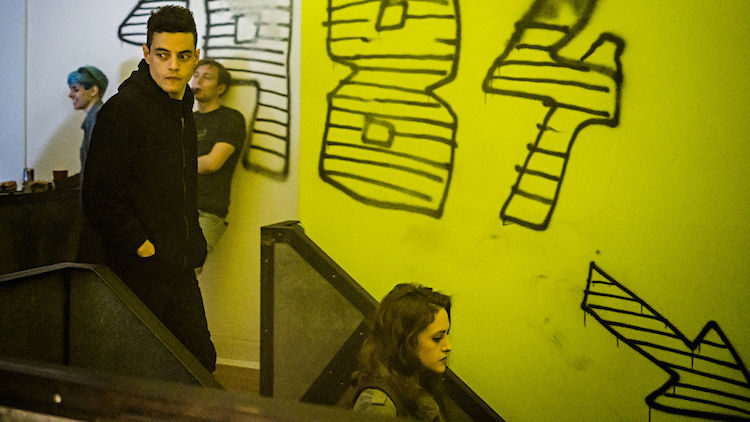 Tomorrow night, “Mr. Robot” returns to USA Network for its third season. A “black hat trick”, if you will. Not only does this week’s premiere of the Emmy-award-winning cyber thriller mark the highly anticipated return of our favorite vigilante hacker, but also the continuation of our Mr. Robot Rewind series, where once again, WatchGuard CTO Corey Nachreiner will be analyzing the hacking accuracy, or  “hackuracy” of each episode on GeekWire.

To kick off season three, Corey has written a column in GeekWire recapping the second season of “Mr. Robot” and explaining some of his predictions for season three. Here’s an excerpt from that article.

By the end of season one, Elliot, fsociety, and the Dark Army had successfully wiped out the digital copies of E Corp’s financial records (loan and credit information) and their backups. During season two, you see the results of this “5/9” hack. With the lack of credit information, few can use credits cards or ATMs. Cash is king, though E Corp’s experimental new crypto-currency, E Coin, is doing well too. This economic collapse leads to many other systems breaking down. Trash covers the streets, protests are everywhere, and the country seems close to martial law.

If you’ve followed my Mr. Robot Rewind series from the beginning, you’ll remember I was kind of confused as to why fsociety encrypted all of E Corp’s data, rather than outright destroying it. It’s clear Elliot knows how to use secure delete programs, since we’ve actually seen him use those tools. So, why would you encrypt something that you never plan to recover… why not just delete it? At the end of season two, Trenton mentioned there could be a way to reverse 5/9. Perhaps they can decrypt E Corp’s data.

Hungry for more hacking goodness? Check out all of Corey’s season two refreshers and season three predictions on GeekWire and stay tuned for a new installation of Mr. Robot Rewind following each new episode all season long! If you just can’t wait for season three, you can revisit all of Corey’s “Mr. Robot” season two articles on Secplicity.