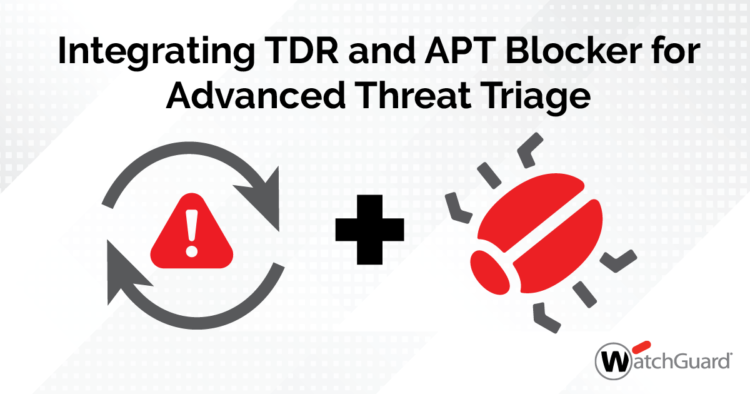 Organizations face a wave of increasingly advanced and evasive malware. Hackers are leveraging zero-days, encrypted communication channels, kernel-level rootkits, and evasion techniques to sneak past network defenses undetected. Daylighting malware in this virulent threat landscape can prove daunting, and so we are starting to see solutions that combine the powers of multiple services in order to root out hidden attacks!

For example, WatchGuard has recently enhanced how it detects malware by adding the ability to send suspicious threats identified with our Threat Detection and Response service to APT Blocker for deep analysis and rescoring in our next-generation cloud sandbox.  This ultimately leads to greater certainty of a threat’s intent, malicious or not, which contributes more effective response actions and faster remediation.

Correlation and Threat Scoring with ThreatSync

Captured network and endpoint events that ThreatSync determines have a relationship automatically receive the most severe threat score of 10 which equates to an actively executing malicious process, attempting to establish a connection to an external malicious destination, such as a compromised website or command and control botnet.

While threat scores provide powerful guidance in dealing with threats, the evolving nature of malware means indicators graded as suspicious (i.e. 3-7) could be early warning signs of yet to be identified malware. TDR now allows administrators to triage threats by manually, or automatically sending suspicious files to APT Blocker for execution.

APT Blocker uses a next-generation sandbox that provides full system emulation (CPU and memory) to get detailed views into the execution of a malware program. After first running through other security services such as gateway antivirus and intrusion prevention, files are fingerprinted and checked against an existing database.  If the file has never been seen before, it is analyzed using the system emulator, which monitors the execution of all instructions. It can spot the evasion techniques that other sandboxes miss.

If APT Blocker confirms that the suspicious file is actually a threat, then ThreatSync automatically increases the threat score to guide response. As a result, you get more threats clearly identified as severe or benign, allowing you to act with confidence.

To learn more about Threat Detection and Response, visit www.watchguard.com/TDR