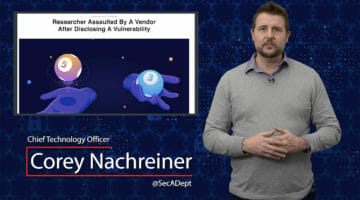 Vendors and security researchers haven’t always gotten along, but when one physically assaults the other you know things have gone way off course. A pair of UK-based security researchers found many critical flaws in a vendor’s gambling player reward systems. All signs suggest that these researchers did their best—really going beyond the call of duty—to report these flaws to … END_OF_DOCUMENT_TOKEN_TO_BE_REPLACED 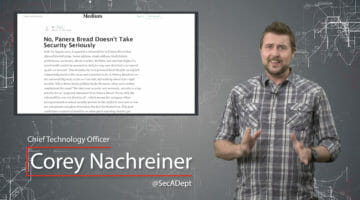 Over nine months ago, a security researcher found vulnerabilities in Panera Bread's web site. The researcher tried to report the flaws responsibly through the right contacts, got accused of being and scam artist, but eventually got through to someone. Unfortunately, eight months later the company had still not fixed the data leaking flaws. That's when Brian Krebs got involved, … END_OF_DOCUMENT_TOKEN_TO_BE_REPLACED

A security researcher was arrested in Florida for publicly disclosing a SQL injection (SQLi) vulnerability in an election web server. Should we be up in arms that they're demonizing someone helping organizations patch flaws, or upset that the "hacker" is poking his nose where he shouldn't? Normally, I side immediately with researchers, but this case is a little gray. Watch … END_OF_DOCUMENT_TOKEN_TO_BE_REPLACED