As the second largest access point (AP) supplier by market share, Aruba Networks, a HPE company, has worked hard to provide worldwide businesses with enterprise-grade Wi-Fi connectivity.  You’ll see the company’s APs in many schools, retail locations and airports, among other places. Want a fun scavenger hunt idea? Look up at the ceiling next time you’re in a building and try to identify the AP brand.Be forewarned, this activity is addicting.

Without a doubt, Aruba is an expert in Wi-Fi connectivity.  But, is the company also an expert in cyber security? Do Aruba APs effectively protect businesses from the six known Wi-Fi threats categories?  These six threats operate at Layer 2 of the OSI model and are the entry point of all Wi-Fi attacks. If a business is effectively protected from these six low-layer Wi-Fi threats, then the organization is safe from countless Wi-Fi hacks (even the ones that novice techies can learn to perform in minutes on YouTube). These hacks have been around for more than twenty years and expose a flaw in the foundational invention of Wi-Fi where client devices (phones, laptops) have no way to determine if the Wi-Fi SSID is being broadcasted from a legitimate AP (for example an Aruba AP), or from a hacker’s device such as the totally legal Wi-Fi Pineapple penetration testing tool.

Results are seen in the table below and full test details can be downloaded here. Note the first two columns show the Aruba AP-303 operating alone, and the green columns show it when a WatchGuard AP125 is added to the network to protect the AP-303 from Wi-Fi hacks. Did you know that there is no vendor-neutral standard that defines exactly what features and capabilities an AP must have to claim it has a Wireless Intrustion Prevention System (WIPS).  As a result, the WIPS offering from Aruba and WIPS offering from WatchGuard end up being totally different in their level of comprehensiveness and protection. This is one of the main reasons why the Trusted Wireless Environment framework was created to bring transparency to the industry and raise awareness on the seriously overlooked problem of Wi-Fi hacking. 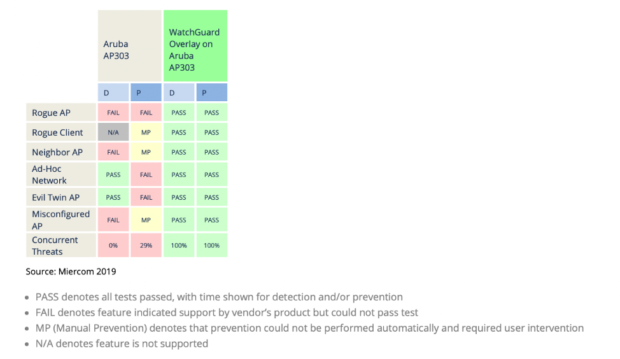 As with the Ubiquiti UniFi WIPS test results, you’d have to dig a bit deeper into Aruba’s website to see what Wi-Fi security features are advertised (and keep an eye out for asterisk footnotes indicating a claimed feature could actually still be under development).  At first glance, the advertised RFProtect (unique brand name for WIPS) feaures sound solid:

That might not exactly embolden an organization to turn on the WIPS settings in Aruba. It is true that interfering with your neighbor’s legitimate Wi-Fi signal is illegal in most countries.  However, you have every right to neutralize a Wi-Fi attack against you.  Likely part of the reason why vendors such as Aruba and Cisco Meraki list these kinds of warnings is that certain variations of WIPS can suffer from false positives and false negatives.  A false positive for example could be that a WIPS feature accidentally flags a neighbor’s legitimate AP as a Rogue AP and prevents connections to it.  One such implementation of WIPS that suffers from this false positive/negative situation is wired/wireless MAC address correlation. Miercom describes this and explains why an Apple Airport AP can bypass most every vendor’s Rogue AP detection WIPS feature in their report:

Many Wi-Fi security solutions utilize MAC address correlation to identify devices on the same network. The Apple AirPort AP used as the Rogue AP in this test has a differential of more than 5 bits between the wired and wireless interfaces. This variance could potentially cause correlation algorithm to fail, making the AP undetectable on the wire and therefore undetectable as a rogue AP. Products unable to detect that the AP is connected to the same network as the DUT will result in a “Fail” outcome and imply susceptibility to attackers utilizing products similar to the Apple AirPort or who have altered their MAC address with a customized tool. WatchGuard has overcome this issue with its patented “Marker Packets” technology which identifies same network devices with a more reliable detection method.

If You Use or Deploy Aruba APs: Protect Them From Hacking with WatchGuard

Miercom test professionals recognized that WatchGuard has been gearing its Cloud-managed AP roadmap with unique security feature sets. To determine how existing Aruba Wi-Fi networks can become Trusted Wireless Environment compliant, Miercom configured a WatchGuard AP125 AP as a security sensor dedicated to protecting the AP-303 from the six known Wi-Fi threats. The results show that Aruba was 100% protected once a WatchGuard AP125 APs was added.  From a deployment perspective, network and security administrators will find a simple solution where the Aruba APs continue to connect Wi-Fi users as usual and the WatchGuard APs act as a sort of WIPS sentry, constantly monitoring the air space and wired network for presence of any of the six threats.

If you have an Aruba Wi-Fi network and are wondering how many WatchGuard APs you need to add to your existing Aruba network to protect it, any WatchGuard reseller has access to a professional service from WatchGuard that will provide you with a predictive simulation survey that determines the recommended number of WatchGuard APs, installation locations, and WIPS/Wi-Fi coverage range.

Testing Your Own Wi-Fi Network for Wi-Fi Hacking Vulnerability